skip to main | skip to sidebar

Each year I look forward to attending the TNNA convention to see what is new in the knitting world and find new yarn, patterns and products for the website. The convention this year was in San Diego and was fun although not as well attended in my opinion as in past years. Maybe it was my imagination and maybe the economy. 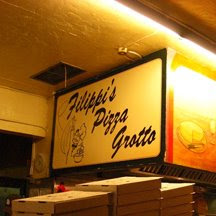 I will write later on in the week about the actual convention and post pictures with some of my favorite vendors but first I thought I would share my funny experience with you all.

Traveling with my friend Harriett is always interesting. A few years ago my husband and I went to Cancun with Harriet and her husband and she decided to take along some meat that she was going to cook. She packed the meat frozen in her suitcase and when we arrived in Mexico and went through customs they ask if you are bringing in meat or vegetables. At this point since they weren't opening the suitcase I would have said no but not Harriett. So she fessed up and we all watched as they took away the meat and threw it into the trash. I tell you this just to give you some background. So the two of us went to San Diego for two days. We left early in the morning on Saturday and after a very long day at the convention center running literally from one end to the other every hour (I will explain more about that later) we checked into our hotel exhausted. We got to our room and the first thing we hear is a train. A very loud train. It was like the train was going through our room. It turned out that our room was on the corner right above the train tracks and the trains were coming though about every 20 minutes with loud whistles. We panicked figuring we were not going to get any sleep. We were tired and hungry. We wanted to change rooms but the hotel was completely sold out so we were going to have to deal with the noise. We rested breifly and decided it was time for dinner. We thought we would go to the Gas Light district but found out that the hotel shuttle wasn't running. The desk clerk recommended a restaurant in Little Italy that was only about a two block walk from the hotel that he said was his favorite restaurant so off we went. When we got close a nice man started to talk to us so we told him we were looking for Filippi's that we heard it was the best place to eat and did he know where it was. He told us that he did and that in fact he owned the restaurant. We figured he was joking but he told us to follow him pointing to the signs and the awning. It might have been more weird if the streets were not all crowded with people. We arrived at the restaurant door where a long line of people were waiting to get in and a woman was taking names. The man said "they are with me" and he marched us in and sat us at a table. It turned out he really is the owner and it is a family owned business. It could be one of the best meals I have eaten in a long time.
We started to order and our waitress told us that we probably wanted to share the dinner salad and share the meal. Harriet said she was really hungry and she was concerned that there wouldn't be enough food but I told her we could always order something else if it turned out not to be enough. It was a good thing we listened. The salad came and it was really large. More than enough to share and so was our dinner. We orderedShrimp Filippi. I would highly reccomend it. Tony and the waitress suggested either that or the lasagna. I a 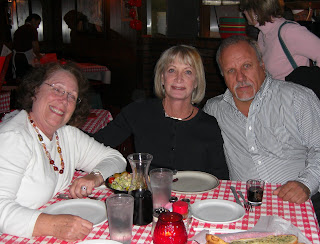 m still thinking about how good it was. It was loaded with bay shrimp over linguine tossed with Olive oil garlic and chopped mushrooms and tomatoes. We ate about 2/3 of the meal. We had a half bottle of Chianti and order of garlic bread and the salad and diner and our bill was $28. We had so much left over that I told the waitress to pack it up and give it to a homeless person and she told us they do that all the time. For desert we went to a Gelato store two doors down and had wonderful lemon ices. Things like this only happen when I am with Harriett. It turned out to be a night I will remember for a long time and I am looking forward to returning to the restaurant. That is Harriett, me (in the middle) and Tony the owner.

Posted by The Patchwork Frog Knitting Blog No comments: